Interview with BST from The Order Of Apollyon 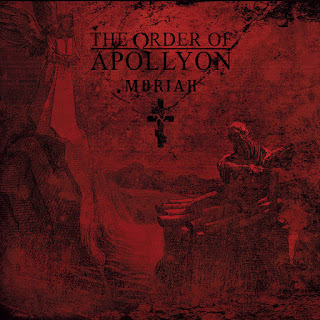 BST: We've existed since 2008. At the time, Daniel Wilding and myself were playing together in another band, which felt like somewhat of a dead-end. We wanted to create something with deeper meaning, and uncompromising yet professional, with music based on solid riff writing, and a spiritual exploration of the death cult that is embedded within mankind's dna.

You've recently played Ascension Fest in Iceland on the Saturday alongside "Svartidauði", "Auroch", "Bölzer" and many more, how was the festival as a whole for you?

BST: It was T.O.O.A.'s first high end concert outside of France, and we could not have asked for anything better than this. The festival is amazing, Stephen Lockhart and his wife are truly demigods. Everything about this experience felt right, and we felt honoured to be playing alongside such talented elite artists.
Highlights for me: ANTAEUS and their ruthless savagery, TREHA SEKTORI's total immersion into death and chaos, MISTHYRMING's incredible performance... And all the rest was extremely good, all who were on that stage deserved to be there.

What is the meaning behind the name "The Order Of Apollyon"?

BST: Apollyon is the angel of the bottomless pit, and enigmatic figure of John's Revelation. I was fascinated by the ambiguity of it, and associate it with mankind's own afflictions.

"Moriah" was released last year, what was the whole album creation process like for you?

BST: The fact that we've had a stable line-up for some time now, consisting of four people who are on the same wave length, makes everything simpler, easier, and I now realize how crucial this aspect is, when trying to achieve pure art. No compromise had to be made, we spent enough time to get prepared, and make things properly, but no too much, so it kept spontaneous enough, without having a moment to doubt ourselves. We rehearsed for this one, more than we had ever done before (at the start of the band, we lived in different countries, which made it complicated to gather). The drummer was able to prepare in his father's studio, where he eventually tracked his drum parts, and you can't really have better conditions than that when working on the preproduction of an album.
All the rest was recorded at my studio, within a very decent time schedule.

How did the band actually form?

What came to mind when thinking of the album art for "Moriah" and who then designed it?

BST: Once again the idea was to play on the ambiguity of the judeo Christian cult. As explored in the song "The Lies Of Moriah", for which AK, our bass player, wrote the lyrics, we meant to picture the mental image in Abraham's mind, when asked to kill his only true-born son. The idea behind the whole album is to show how mankind's spirituality deep down is still about Human Sacrifice, at heart.

Lyrically which song stands out to you the most and why?

BST: "The Original Cries From Jerusalem" was written by a Belgian madman, who's the mastermind behind EPOCH (one of the sickest death metal band there is, you have to listen to their album "Sacrosanct"). He is a much better lyricist than I am, and I do love his contribution very much.

Do you try and capture a theme of mood when writing your music?

BST: I'd say that I manage to write the appropriate music when I am in the appropriate mood, which means songwriting can take a long time, according to how focus I can be, and what state of mind I am in.

You also have a studio as well, how are things going with that and what bands (if you can say) have you been working with recently?

BST: The last releases I worked on were TOTALITARIAN's "Bloodlands", very brutal black metal. There was also the WORMLUST-SKAPHE collaboration, a nightmarish EP of very twisted and sick music. I'm very busy with several other albums or EPs at the moment... Some very promising new bands.

BST: Thank you for your time.
Hail ASCENSION FESTIVAL and all those involved. Respect to our comrades and collaborators around the globe.
Judgement Is Upon Us.

Be sure to support The Order Of Apollyon via the link at the top.