Interview with Dan from Underdark 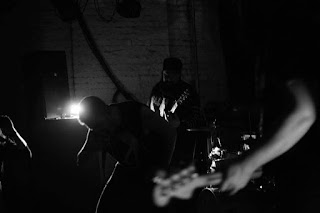 To start of the interview could you introduce yourself: Hi I’m Dan. I play Drums for Underdark.

I noticed early this year that your album is fully mixed and mastered, do you have any plans for when it's released like a tour an album release show?

We have some things to work on concerning the album and future, but that’s as much as i can say right now.

You played bloodstock last year on the new blood stage, how was that for you and did you manage to catch any bands you really wanted to see?

Bloodstock was definitely up there for shows for us. Huge, really receptive crowd which we was blessed to see.
I fell ill straight after we played and ended up in the hospital tent, missing suicidal tendencies in the process. Managed to recover by the next day and caught Power Trip absolutely decimate everything.

What would you say is the best gig that you've played?

My personal favourite show was either our Berlin or cologne shows last year. Two of the best cities I’ve had the pleasure to visit. Both DIY basement shows. Big rowdy crowds and made a lot of new friends on both those shows.

What bands have a big influence on you when it comes to writing music and why?

My personal influences vary on what I’m currently listening to, but can be vaguely narrowed down to: converge, Deafheaven, The smiths, thou, this will destroy you, moloch, dawn ray’d, deftones off top of my head.

How would you describe your sound to somebody who is not familiar to Underdark?

What bands would you love to play with?
Deafheaven, converge, deftones, thou, napalm death , glassjaw, bongripper, Chelsea Wolfe, Emma Ruth rundle, conjurer. List is absolutely endless if I got going.

Bloodstock is ticked off the list for big festivals that you've played, what other festivals would you love to play?
Personally, Roadburn festival is the only one on my list. After going for the past 4 years in a row and seeing firsthand what a special festival that it is. It’d be an absolute dream to play it.

Who are the most underrated bands in the UK in your opinion?
Moloch, Crimson throne, coltsblood, corrupt moral altar, Antre, earth moves, gets worse, shrykull, Lindow Moss

No gigs to announce yet, but check out all the bands mentioned throughout this interview, lots of cracking artists to check out.

Thank you Tom for the questions. New music is in the pipeline!