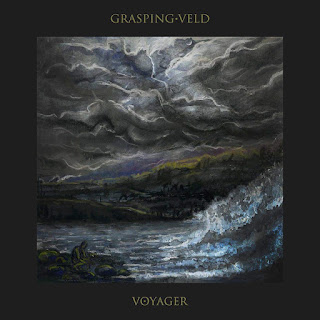 You've just released a new album titled "Voyager", it's still early days but what has the reception been like for it so far?

We've been pleasantly surprised by the reception. Especially because it's pretty much underground music and that we spent almost nothing on promotion. We receive lots of positive feedback and not just from our friends. For instance people from France, Germany, Belarus, Canada and USA  have been saying and writing kind words. And it's the most valuable thing we could get from the release.

What is the meaning behind the name "Grasping Veld"?

The name was coined by our drummer Evgenii. As you can imagine he's a very creative person.
It doesn't actually have a simple or direct meaning, rather it represents an image and a feeling of being under the pressure (or a grasp) of the forces of life, fate or space (or nature in the form of veld).

Do the lyrics you write have any specific meaning at all?

Yes. Our singer Igor is a philosophy teacher, so he obviously couldn't miss the chance to add a meaning to something :). More seriously, the voice is not the most important part in this kind of music and the communication is rather emotional than textual. But still we believe that the meaningful text is an important addendum to the music. So the songs have different stories but there are common images of loss, anxiety, fear, isolation and enormous space around.

What song off of "Voyager" would you say you enjoyed the whole process of creating it the most?

We generally enjoy the thing we do. But specifically that would be "a mere satellite". This track has a history behind it. Two years back our bass player Andrey, a co-founder of the band had to leave Grasping Veld and we played since with a few other guys. They were great but we missed him. And by the end of 2018, when we started looking for another bass player Andrey came back. We actively started working on the new material and made a song, that sounds a little different from the rest of the album. It is the only track recorded by the reunited original line-up.

What words would you use to describe "Grasping Veld's" sound?

It's tense, aggressive (more aggressive than most of post-metal), with elements of modern hardcore, doom-metal and even post-black metal influence. It could be dark and hopeless, or straightforward and groovy. We're not trying to sound unique, or to copy anybody. We do what feels right.

How did the band actually form?

Once upon a time there was a band whose name no-one remembers and no-one can understand or even pronounce (guess who coined the name). The band performed instrumental post-metal and consisted of Mikhail on guitar, Evgenii on drums and Andrey on bass. At some point in 2012 a guitarist Alexey (the main composer now) joined us and the band changed its name. In 2016 we found Igor to become a non-instrumental band.

You also have a self titled release on your bandcamp, would you say anything regarding the band's sound has changed since that release?

This is related to the previous story. In 2012 we started making new material and in 2014 released it as an EP. After Igor joined the band the drummer Evgenii (the creative guy from before) proposed the idea to re-issue the EP with vocals and remix it with a new sound of the band, that became denser and heavier. You can almost call it a new album of a new band. So by that time our sound did change and it was a good change. Now we're recording a new 3 track EP with a working title "Abyss" and we can assure you the sound will change again.

When was the band's first live performance and what type of reactions did you get afterwards?

The very first live performance was summer 2016 and it was a moderate success. At that time Alexey (guitar) was unable to play with us and was replaced by a different guitarist. The reaction on the performance was better than we expected, but the lack of experience was a problem (primarily to ourselves). The only song that we released from that time (even though it changed a lot) was "Let's wait forever".

Thank you very much for the chance to talk about ourselves! We hope these stories didn't bore you. Our new EP is coming up. Don't miss it! Make space desperate again!