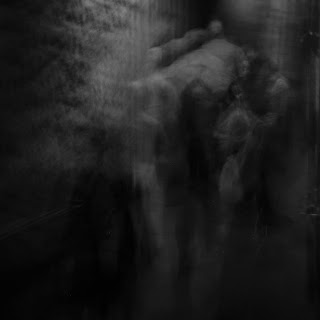 We're Hidden Mothers, a 5 piece post black metal band from Sheffield. We are a culmination of artists that were in previous outfits and came together to create this project.

Originally the band was called "Grandfather", what was the reason behind the name change?

You walk into a room of fresh faces and begin to create music, and it's when you create a solid idea from it, that you begin to understand more of what you're about. Grand(father) was an initial idea for a name, but Steffan (vox) put forward the new name and it just made more sense.

I had a listen to "The longest Journey Yet" via Astral Noize, which I was quite impressed by, what should we be expecting when you release the EP?

For us we feel TLJY is a great introduction to what we have written thus far. Our sound is all about mixing ethereal landscape style riffs, bat moments of almost violent black metal style components. This is why we chose this track as an introduction because it blends everything we are doing into a short track. But believe me when I say it gets heavier from here on out.

From what I've seen you're a relatively new band, have any of you got or had any other bands on the side of "Hidden Mothers"?

Steffan is a former vocalist in Ba'al who in his occupancy won M2TM Sheffield, played Bloodstock and won recording time with Russ Russell.
Liam is a former bassist in Relics who shared stages with Cancer Bats and bands of similar ilk.
Arian is former member of post metal act Fly on Bird Fly on and is currently in New Ghost.
Luke has been a guitarist for Chasing Traits and maybe, maybe not be in hayfever.
And Adam is a drummer fresh out of music at college, and he's never really been part of a fulltime project, but you would never guess.

What bands would you say are your main influences when it comes to writing music? from listening to "The Longest Journey Yet" I can hear the "Blackgaze" kind of sound.

We all come from different musical influences and I feel that's the great part. Within a room you could never pin us down for being one specific drive when it comes to music. We just share a common interest in landscape post bands and really heavy blast black metal.

You've been recording at No Studio with Joe Clayton, what made you decide that he would be the best fit for capturing your sound?

We chose Joe specifically because of his ear for music. Most of us have followed his previous music endeavours, and the bands he has recorded prior to us. And it was the easiest decision within ourselves to have him be the person to bring out the best in us. And didn't he just.

I've noticed that you have two confirmed gigs so far and one of those being with Inter Arma, how did it feel when getting confirmed for that one in particular?

We actually have 5 now you mention it. From outset we decided that we were going to aim high, but we never imagined that we'd be able to get off to the great start that we have. We are blessed that we are all people that attend shows and are actively networking.

To play with Inter Arma one is Steffs dreams, and someone how he made that happen by sending the promoter the track, who was that impressed that he booked us there and then. Absolutely Flattered, so cheers Ad.

What local/UK bands are you into at the moment and would recommend checking out?

Bloody hell where do we begin. Blind Monarch, Hundred Year Old Man, kurokuma, Archelon, Ba'al, Glarus, Vow, Bovidae, Gilmore Trail, Awooga, Coffin Smoker, Skyligers...... FFS there's just to many right now because we feel music on at least a live level is the strongest it's been for a long time

If you could play a show with any 3 bands who would they be?

Amenra, Downfall of Gaia and Oathbreaker.

Thank you for your time.

Be sure to check out Hidden Mothers via the link at the top, you can listen to "The Longest Journey Yet" here https://astralnoizeuk.com/2019/06/14/premiere-hidden-mothers-the-longest-journey-yet/