Interview with James from Hellripper 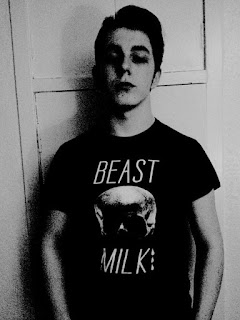 Introduce yourself
I am James, from Hellripper, Lock Howl and Lord Rot. These “bands” are all solo projects of mine in different styles as that’s the way I prefer to work nowadays. I am from Aberdeen, Scotland but am based in the Highlands.

"Hellripper" started in 2014, what made you want to start the band?

The idea for Hellripper was around for a year or two longer than that actually, but things didn’t really get going until 2014. In the Summer of 2012 or 2013 (I can’t remember which haha), I was bored and wrote a few songs in the style of bands like Sodom, Motorhead, Toxic Holocaust and since I didn’t know anyone else that was into that kind of stuff, I thought it might be fun to try and record them alone. I did get these songs recorded but was unhappy with the final results and so they were scrapped (I did rewrite a couple of them for use on future Hellripper releases).

I left it for a while, and then the idea came back into my mind again in 2014. By this time, I had learned a bit more about recording/mixing etc. and thought that if I didn’t do it now, then I would never do it. Results were never going to be perfect since it was all recorded in my bedroom but I was really pleased with the final results this time around and decided just to stick it up online.

Your first release was an EP titled "The Manifestation Of Evil" which was released in 2015, what kind of reactions did you receive upon its release?

To be honest, I wasn’t expecting any sort of reaction at all from the release. I just released the EP for my own pleasure and thought maybe a couple of my mates in the local scene would like it.

It ended up reaching far more people than I thought, mainly through word of mouth I guess since I didn’t really do much promoting and people seemed to enjoy it! A few labels got in touch and a few versions of cassettes were released which definitely helped get the music out there! Overall the reaction was very positive and far more than what I expected!

When was "Hellrippers" first live performance?
It was on July 9th 2016 at a rehearsal room in Aberdeen called ‘Musical Vision’. A really cool place for shows and people always go nuts in there!

The artist behind the "Coagulating Darkness" album art is Skaðvaldur, what kind of thoughts did you have to put across to get the art you had pictured?
It was a while ago now, but I don’t think I gave him much direction at all. I think he heard a few of the songs that I had recorded at the time and had the song titles and just went from there.

Back in the April you played the London date of "Midnight's" European tour, Midnight are listed in your influences, how did it feel being able to share the stage with one of the many bands who inspired you to create your music?

Yeah! It was an amazing show and we had a great time in London, both playing the show and meeting people! Midnight played a great show as expected and the guys were really nice. We’ve been quite lucky so far to have played some bigger shows in the short time we have been a live band and it’s always fun to be a part of a show or festival with bands that you admire!

You released an EP this year titled "Black Arts And Alchemy" which you recorded and mixed yourself but for mastering it you had "Joel Grind" of "Toxic Holocaust" on the job, what made you decide that he would was the best fit for it?

Well, of course Toxic Holocaust are a big influence on Hellripper so Joel obviously knows this type of music well and what’s required for it. He’s also great at mixing/mastering and has been involved with a whole bunch of great sounding records over the past few years so I thought that his involvement would enhance the sound of the EP, which it did!

From what I've seen you're working on the next album, how are things going so far with that?
Yeah, going really well! It’ll contain 8 songs and so far I have 1 song almost fully recorded which is sounding really good! Sound-wise, it is what you can expect from a Hellripper album but this time I’ve tried to incorporate a few new elements into that formula to keep it interesting! I’ve signed with a new label for this release which is quite exciting and will be announced later in the year, and the album will most likely be out in the first half of 2020.

You're off to the Netherlands in September to play Bloodshed Fest, any particular bands you're looking forward to seeing the most?
Definitely! Aborted are a favourite of mine, so they will be cool to see! Tomb Mold, From Ashes Rise, Coffins… the whole line-up is excellent haha! So it should be a fun weekend!

Be sure to support Hellripper via the link at the top.