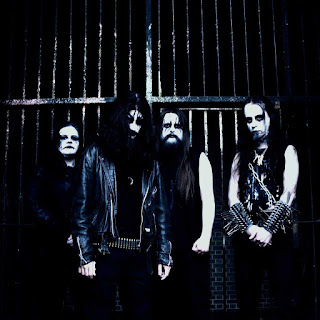 Mørktår started off as a solo project, at what point did you decide to take it further to the point of it being a full band?

T: Mørktår had always been intended to be a full band from the beginning,but due to lack of competant and reliable people as usual on this planet,it remained as a solo project for longer than I had wished.There is one release out there-Cries From The Dungeon,which was released in 2006 with an actual drummer,but we didn't share the same views both musically and ideas wise,I can't go in to detail with what happened after,so therefore the band went back to a solo project until 2011/2012.

Mørktår has been around for 13 years, how would you describe the progression of the band as a whole?

T: Over the years Mørktår has developed from sounding like this band and that band to forging its own style in UKBM,so there we have a huge progression,as you can hear on the releases in the past.I have never said to anyone who has been in the band or today,that they must play or do things the way I say,this is an important factor or you will have pissed off band members who won't be able to present some new ideas or try something different and will just walk out and leave you on your arse.We have become a force of our own being in this totally useless world of imbiciles-more aggressive,more of a sharp tongue and creating more hate and fear.We have learned a lot together...

What is the meaning behind the band name?

T: The name Mørktår is a literal translation from Norwegian meaning 'Dark Year.' The name came to me within a moment of thinking about a band name,trying to think about a suitable name which is best to portray how I feel and the style that we play.

Would you say from personal experience that being a one man band is easier or more difficult to manage than a full band itself?

T: From personal experience it's just a way of how you manage yourself or a whole band in the first place,they both need different skills to be able to be able to succeed.For example,if I was still running the band myself,I would have only myself to record or myself to look for resources etc which is very time consuming and for me less pride after because if it sounds shit,I will scrap it rather than look at what I could improve.But with a full band,we just ask when we can rehearse next,if there's any new riffs or ideas we can bring.This defenately helps save a lot of time and patience.We have some very commited and talented members now,who share the same views,experiences and ambitions.

When was the first ever live performance for Mørktår?

T: That was in 2012 in July in Stockwell, South London with Aeternum,Virophage and Void,can't remember the exact date though.It's always good to know you made an impact on the first gig when you have some people ask for a photo and autograph after.

How would you describe Mørktår to somebody who was unaware of the band?


L: Aggressive, intense, no holds barred and unique to the extent that I don't recall any other Black Metal bands sounding like Mørktår. I would recommend those who have yet to see us live to do so and experience what we have to offer!

M: Mørktår is a raw black metal band with the true sound of underground 90s Black Metal,with powerful machine gun drums and razor blade sharp guitar sounds,with heavy yet ghostly bass in the background. The vox are aggresive with agonising pain sounding at the same time-All this makes the band unique.

What are your main influences when it comes to writing music?


O: In the context of writing drum parts, I think the main Influences are the other band members. When the songs are written well it provokes me to do interesting things on the drums.But other than that I listen to a variety of different styles of music and I try to pick and chose what is appropriate to have in my playing when it comes to Mørktår.

T: For me I don't always need music to influence the writing,a simple trip to the shop for example will suffice.You can encounter experiences on the way,from useless druggies in an alley way walking like zombies or some cunt who walks out a bookies and asking for change,though you yourself have just finished working,so some advice from me: "Just carry on gambling and taking drugs please,enjoy what you love." Only one person wins at the end and that's the boss of the bookies or the dealer while the consumer wallows in their own demise. But musically for me with influences it varies from Black Metal to Thrash to Heavy Metal and to even old electro music from 70s and 80s.

M: I get inspiration through life experience too,daily observations of the disgusting human race,and of course...Through the amount of music I listen to.

L: I have multiple influences when it comes to writing Black Metal,but I try to not be swayed by those. Especially when it comes to creating music for Mørktår.But if I were to name drop a few,they would be the likes of Leviathan,Maniac Butcher,Besatt & Krieg.

You're currently recording for your second full length, how is that going so far?

O: It is going quite well I'd say,the drums are coming along quite nicely already.I can't wait to see peoples responses to it because it is going to be quite a step up from previous releases and still have that true Mørktår sound as well.

L: The creation of the second record is going well.The rough guitar tracks have been laid, Orobas' Drums are near completion to which my guitars will then be re-recorded.Afterwards Morrigan will begin the recording of her Bass,followed by Thrym with Vocals. Everything is moving at a nice pace. So expect the new record soon. We are extremely pleased with how everything is going.

M: The recording for me will start in the very near future and I'm looking forward to the final product.I'm enjoying playing and practicing the new tracks,they are as you would expect Mørktår to sound,but on a new level!

T: Same as Morrigan,once the guitars and bass have been recorded,I will enter the studio for the vocals.This album is sounding much better than Dark Years already considering we are part way through it and before any mixing and mastering happens.

M: Yes I have a few, so Old Forest, Mütiilation, Praesepe (If they're still around-Andrez?) Sonny Antoniou,and finally Old Star album by Darkthrone!

Thank you for the opportunity of this interview...Now to the blade we go and hunt for prey!

Be sure to support Mørktår via the link at the top.