Interview with Omnio from The Wolf Garden 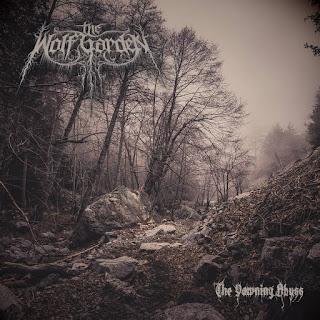 The Wolf Garden are a naturalistic black metal band from the south of England. The band is comprised of Omnio (TH- Guitars/bass/keys/vocals) and Valtiel (PB- Drums and percussion).

Congratulations on reaching over 14,000 plays over some of the most major streaming platforms on "The Yawning Abyss", how does that feel?

Very humbling to be honest. When we released the EP in December last year it just took off, which is a great feeling, especially as this is the debut offering.

How did "The Wolf Garden" come about?

TWG started as a project between myself and Adam Stanley (who you can hear on the first song providing the clean vocals and the guitars for that section) but as we were already involved in a lot of other musical projects the collaboration didn't go much further. So when I continued writing and it came to the drums I knew I didn't want to use a drum machine or sequencer, and I've known Valtiel for many years anyway, so he was my first choice.

Thankfully he was more than happy to play. His drumming really brings the whole thing together. I don't think The Wolf Garden ever set out to be a black metal band, but rather just the metal music that I would want to listen to, and so it turned into what you can hear on Bandcamp.

I've noticed from photos that you have posted that you played in a band in the 90's, what band was this?

I started a metal band back in 1995 called Entropy, and we really didn't know what we wanted the band to be, or sound like, so it eventually morphed into the band Season's End in around 1998, who are still going now. We played gothic metal back then, now it's a lot more progressive and symphonic.

I left the band in 2003, but we still see each other occasionally and are still very much friends. I'd highly recommend giving them a listen.

Would "The Wolf Garden" ever grace the stage or is it strictly an online project?

We are very much a studio-only band for the time being, mainly because it would involve a lot of logistics to get band members together, and also because we are both quite private individuals these days. Never say never though haha!

The CDs of "The Yawning Abyss" have sold out, do you plan on releasing physical copies in any other form?

I think you can still get a physical copy of the CD through Naturmacht Productions. I don't know if there's any plans to release a tape or vinyl of The Yawning Abyss, as I'm writing the new album at the moment, so that will take precedence, but if the interest is there for cassettes etc then that might be something to look out for in the future. I know that there was merch being discussed but it's all very secretive at this stage! You'll just have to wait and see! The EP is name your price on our Bandcamp page though, so you can still get a digital copy.

What or who were the main influences when it came to the writing for "The Yawning Abyss"?

Music-wise I've always tried to steer clear of trying to sound like other bands, although that's something that is almost impossible, but the main influences for the record was to tell a story from start to finish, but I wanted there to be a very natural sound to the record. So I use a lot of ambience and weather sounds, birds, water, rain etc. If I can create an atmosphere that people can get lost in then I feel I've accomplished what I set out to do. I have been told that people think we have similarities to Numenorean, Limbonic Art, Ved Beuns Ende and a few others, but I hear completely different bands after I've written the music, so subconsciously they're getting in there.

Do you have any go to Black Metal albums that you never seem to tire of?

Well, 'In The Nightside Eclipse' by Emperor never gets old for me. Some others that I still listen to regularly are 'Storm of the Light's Bane' by Dissection, 'Principle of Evil' by Cradle of Filth, 'Autumn Aurora' by Drudkh, and although not black metal, Anathema's 'The Silent Enigma' is still a regular play for me. There's so much good black metal at the moment it's hard to keep up, but there's a lot of UK bands are really starting to come out of the woodwork, bands like Barshasketh. Incredibly good band.

What are the future plans for "The Wolf Garden"?

Well I'm writing the next full-length record at the moment, I think I'm probably about halfway through right now, so hopefully that will be out on Naturmacht Productions by the end of the year. As I said earlier there's plans for merchandise too, tees and patches, and that will most-likely coincide with the album launch. There's also a plan to create and launch a website, and we are looking at having a music video done for the new record too. Lots of fun stuff is on the way!

Yeah so to everyone reading this, to everyone who clicked on our links, listened to the songs, downloaded or bought the EP, and to Rob at Naturmacht Productions for helping to boost TWG to where we are! Cheers!

Thank you for your time and be sure to check out The Wolf Garden via the link at the top.