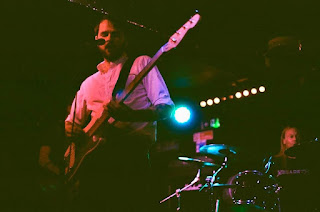 We are a black metal project based in London, UK.

I can imagine you've probably been asked this numerous times but the self titled album cover is probably one of the most stand out album covers in black metal in my opinion, what went through your mind when you were thinking of album art for it?

I decided that adhering to black metal iconography would have been disingenuous so I chose a design that felt more authentic.

The first "Sacred Son" performance was last year with "Auri" and "Dawnwalker" what kind of reception did you receive?

The reception was great - there was a bit of apprehension on our side with it being  our first gig but we put in a lot of hours in the practice room to get as tight as possible which I think was reflected in the performance.

Before "Sacred Son" came to light did you have any other bands/projects?

Myself, Mark and Stuart (guitarists) were in a post metal band called Interiors a few years back. Before that I played in a hardcore band called Disasters and a shoegaze band called Dead Sea Colour.

The self titled release is two years old and you've started recording for the next release titled "Arthurian Catacombs", how is that going so far?

It’s nearing completion and will be released at the end of August.

Do you have any albums that you would say had a massive influence on you when it came to writing the self titled release?

How did "Sacred Son" actually start?

I saw a couple of friends self-record and release their own stuff and I thought it looked like fun.

This year has been quite interesting for metal releases, any albums that have stood out for you so far?

What made you want to take "Sacred Son" to the next level and become a live band?

It was never my intention to play live but I felt obliged to given the coverage the first album received.

Anyone who has bought a record or come to one of our shows. I love you, truly I do.

Support Sacred Son via the link at the top.