Interview with Sahil/Demonstealer from Demonic Resurrection 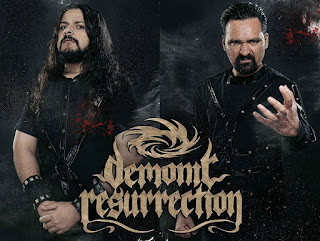 To start off this interview could you introduce yourself?

DS: Hello! I'm Sahil Makhija, better known as 'Demonstealer' which is my stage name. I'm the frontman of the metal band Demonic Resurrection based out of Mumbai, India. I'm also the host of a Youtube cooking show called Headbanger's Kitchen. I've been a metal musician for the last 19 years and have also played in various other bands and projects.

I saw you guys at bloodstock 2018 which was a fantastic set by the way, can you list 3 bands you managed to see at the festival that you really enjoyed?

DS: I think from 2018 my highlights of the festival were definitely Judas Priest, Emperor and Septicflesh. It was my first Priest concert and also Septicflesh. I've seen Emperor a few times at festivals when they did the Nightside tour but watching them play Anthems from start to finish was definitely a highlight. I'm a huge fan of Ihsahn as a musician, both as a solo performer and of course his work with Emperor.

Somebody who doesn't listen to death metal asks you to recommend 3 bands, what bands would they be and why?

DS: I think without a doubt the first band I'd play them would be Death and I'd probably start with Symbolic or Sound of Perseverance as those albums have super catchy songs and also are quite melodic. I'd definitely throw in Dark Tranquility's projector album as well for the same reason, it's melodic and catchy. Finally I'd give them a taste of some blackened death metal with Behemoth's Demigod album. I think it's just one of those albums that's not only brutal but it's also super inspiring and has a lot of hooks. I think it's got that wow factor for sure.

Name 3 songs you can listen to on repeat and never get bored of?

DS: Strapping Young Lad - Detox, Blind Guardian - And Then There Was Silence and I think Soilwork's - Shadow Child.

You get to share the stage with 3 bands of your choosing (you can bring back inactive bands) what bands would you pick?

DS: I think this would be my idea tour as well. Septicflesh, Fleshgod Apocalypse and Dimmu Borgir.

If you could have any super powers for a day what would they be and why?

DS: John Dee in Norway is one, we played there as part of the Inferno Festival. There was this amazing little club in Bombay city called Razzberry Rhino where we played many gigs in the early years of our career. I mean it was actually terrible sound systems and acoustics but I guess for the nostalgia it gets select because there is a vibe that you just cannot replicate anywhere else. And finally I think

You're stuck on an island for a week, name 3 essentials you'd have with you?

DS: Well if it's not a deserted island then I guess I could have my phone, my drum practice pad with sticks and maybe my acoustic guitar. If I don't have basic survival stuff then a knife, a fire starting kit and a blanket.

What are 3 of your favourite movies?

DS: I'd say it would be the Lord of The Rings Trilogy, Terminator 2 and The Matrix. Would also say Avengers Infinity War & Endgame would come in a close 4th and 5th. Only time will tell if they climb up the ladder or not.

3 countries you would love to visit and why?

DS: I'd love to visit Japan, the USA and Spain. I've never been to these countries and I've a huge foodie. So for me these places have some of the most amazing food that I'd love to taste. My list is actually quite long because so many countries have amazing food but I'd put these 3 on top for now and I've also left out countries I've already visited.

You have to get rid of all of your albums minus 3, which ones would you keep and why?

DS: I'd say that's not a hard choice. I'd keep Dashavatar, The Demon King and The Return To Darkness. I'd say those are the strongest 3 albums and hence I'd keep them.

Thank you Sahil for your time.