Interview with Shayan from Trivax 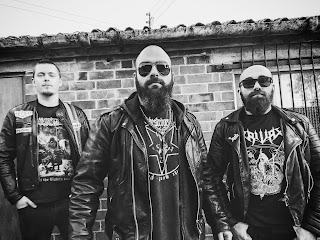 Here I present my interview with Shayan from Trivax

2009 was the beginning of Trivax, it was started in Iran where metal music is banned, how did it feel being able to move to the UK and start fresh?

It's really bizarre and strange looking back at that whole transitioning point of my life. I think that I was probably far too naive and unaware of what it would actually mean to just move across the globe and restart life when I was only just under 17. I don't think that I even thought much of it when doing it, there were no "what if's" in my mind. I will say, my entire motivation and point of view was that I was leaving home for Trivax and that I was coming here to rock as hard as I could, or die trying. I'm proud of the fact that despite all the adversaries, opposition, losess but also successes throughout my life, I'm still here giving my heart and blood for music and still exercising my rights to freedom. I'm happy that I'm still on the same path, and I very much share the sentiment of having a set goal with who I was back then when first moving here. I am one obsessive mother fucker who does not know how to let go, even if the fires burn me alive. Haha!

Trivax did actually play 4 shows in Iran (3 and a half technically) and we are one of the fewer bands who've had the pleasure of doing that and coming out unharmed, just bare in mind that all except one were in completely underground circumstances, There was no public advertisement, posters or anything revealing what we were about other than word of mouth among people. The very first one that we did was in amphitheatre of the Kamalolmolk high school, and I can safely say that the experience changed me as a person and I became hungry and addicted to those energies that we fed from. I was only 16 at the time. We were quite scared that the authorities would come and fuck us up for playing metal and it ended up being quite chaotic in the end, but thankfully no interference from armed authorities and just the school principals and teachers who came in and had to evacuate everyone. I think that they realised halfway through that they had made a mistake for inviting us to their establishment and all of the students were starting to go feral, but they didn't know how to stop it without a serious backlash. Towards the end of the show I remember being in a different world and then suddenly seeing a massive cloud of smoke coming towards us from the back of the room, hahaha! Apparently some kids sat this back storage room on fire during the show and we had to stop playing and evacuate. That was the end of it, but there was something about having that effect on others where they all lost their shit and then being surrounded by so many of them and spoken to like a god that went straight to my head and fucked me up for life.
Flash forward, we couldn't carry on the way things were in Iran and I had to move to the UK. Our first show here was in Birmingham on either the 7th or the 8th of February 2012, only about 4 and a half months after I moved here, I'd say that I was pretty quick at getting that sorted. We played a few covers from Slayer and Death, as well as playing early Trivax material like Set The Torch and YBBB. I was only playing with those guys for about 2 months, so we definitely evolved very quickly. It was all a cool experience, but to be honest, I was so dead set on why I came here that I didn't even feel anything unusual. I was happy, but sort of like I saw that moment coming from so long before that I didn't even really think much about it. Everything about being on that stage felt right and I knew that I wasn't gonna let that be the last time.

Your album "Sin" was released back in 2016, do you have any plans for another release any time soon?

We've just been recording the second full length album and most of the labour side of it is out of the way. I've just been to the studio again this week to finalize the last bits of recording. I reckon that by August this year we'll have the album all mixed and mastered, so the sonic side of things will be ready soon. We already have an album cover and I've just started designing the booklet. There's a lot of exciting shit that we can't wait to unveil, but there's still quite a bit of work left regarding labels, contract signing and all the headache inducing stuff, which is why we can't really give a release date just yet. I can say that it'll make the job easy for whatever label we end up working with, as we've already got a lot of the work taken care of to ourselves and it's just a matter of releasing it.

"Trivax" have gained quite of success throughout the years of being an active UK band, you played Bloodstock 2018, how did it feel playing such a successful UK festival?

It was cool. I tried to soak it in as much as I could. One of the best parts was that both me and my bassist Sully did this live interview in the VIP bar and I thought "Sick, no one here is gonna give a shit about this and they're all gonna be focusing elsewhere" but once the journalist woman started asking about our history and the fact that both myself and Sul are from countries where this sort of music is violently frowned upon, I noticed that quite a lot of people came over and we ended up getting a nice send of with everyone cheering for both of us. That was truly heartwarming and almost felt like we were in a film, haha. But yeah, playing that festival was really cool, I wish that we could do it again now because that experience alone made us so much of a better band and that we'd be so much better if we went back to an environment like that. We'd love to do more of those types of shows at some point, especially outside of the UK.

Would you label "Trivax" under any specific genre at all? I know the "Black Metal" tag is put on you a lot?

It's very hard to say. In some regards I would definitely say that Black Metal is the closest genre that we could be labelled under, purely because of commonness of spiritual exploration through the music. On the other hand I'd say that musically there's not a great deal of similarity between our sound and say - an album like Transylvanian Hunger for example, which is sort of like a sonic blue print for common Black Metal. I know that it's cliché, but I just tend to write whatever that comes naturally and whatever that flows out of my hands when holding a guitar, or whatever unstoppable noise that I hear in my head. We've got this song "Alpha Predator" on the next record that is massively influenced by 88-90's Metallica with an infusion of Dissection and Destroyer 666, then there's another track that starts off as a fucking ballad and ends in a slow and fat distorted section with a choir and church organ. It all depends on what we're feeling like when writing and the life experiences leading up to it. Anything that you do or happens to you can affect the songwriting and the general vibe of what you put out musically. I can't predict what will happen in my life, so for all you know our third album might end up sounding like Green Day on crack. We'll just do what makes sense to us at the time and I will always stick to my guts when composing Trivax material, so whatever label we end up having put on us after is kind of irrelevant. One of the gentleman in Watain once told me that "Words are bullshit anyway when describing music", and that makes perfect sense. I'll advise anyone who ever comes across Trivax to take it for what it is, rather than trying to fit us into a pre-existing box in their heads.

Do you have any specific lyrical themes at all?

Death is probably the most central focus of our lyric writing. I always find that my lyrics are formed of extremely complex and intense thought patterns, yet come out in the most simplistic forms. I always find myself exploring subjects of death, murder, freedom and transformation... transcendance! But what I write is always of my own heart with total honesty, rather than singing about things that have nothing to do with me. I'm aware that some of the said subjects are of a malevolent nature, but that is what I am. It's a hard pill to swallow when as an adult you realize that you are hardwired to create death and destruction, but it's all for a reason and each one of us have our own place in the puzzle of the matrix. I embrace it all and stick to my guts at all times and music is my way of exploring that more than anything.

What kind of atmosphere do you try and create during live performances?

That's a good question, as it's a very important subject, but it's also a very hard one to answer. It is our intent to open this world with endless possibilities. Through a certain frequency, while using the energy coming from a crowd's participation, we open the gates forbidden in this world and let float powers of the divine. On that stage you may see four individuals performing the music that they love with utmost passion, but there's a fifth element as we call it, something truly great and sinister that you cannot see, but you can feel...

In regards to the album art for "Sin" does it have any specific meaning behind it?

Simply research Saturn in the occult. You will also understand why the cover is round-shaped. Congratulations as you are the first interviewer to ask that question.

Any shout outs at all

Be sure to support Trivax via the link at the top.