Interview with Tim from Damnations Hammer 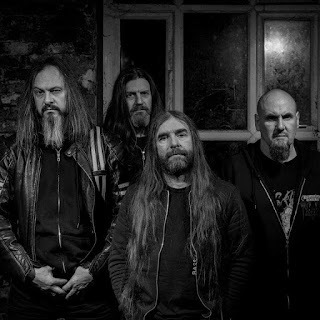 Damnations Hammer were announced for Bloodstock playing the Saturday on the Sophie stage, how does it feel being able to play at such a successful festival?

Yeah, obviously it's great to be announced for such a prestigious gig, very exciting. Suddenly you're in the spotlight of the world's metal media so the pressure will be on! I'm sure we'll rise to the occasion though, I prefer playing on a big festival stage as opposed to a club, there's more room to get into it. Our bassist Jamie always throws a few shapes and on a small stage I've got to be aware of where he is. It's going to be great, we're looking forward to it. We have Mark Mynett who produced our album doing the live sound for us so that's one less thing to worry about. You're usually at the mercy of an in house sound guy at a festival.

Any bands you're really wanting to watch on the Saturday you play or throughout the whole weekend?

We actually play on the Friday. I'm looking forward to seeing Grand Magus who headline the Sophie Stage, love that band. Scorpions too on the Sunday.

For people who aren't familiar with your music, how would you best describe it?

We're a Metal band! We normally get the doom metal tag, but I don't see ourselves as doom per se. When I started the band Celtic Frost was the main influence, I remember seeing them open with the song Procreation Of The Wicked but they played it deliberately slower - that's when I knew what I wanted to play slow, heavy doom laden riffs with a menace and swagger about them. I guess we still have the Frost influence in some of the songs however I'm more inspired by certain songs by other bands - Metallica's Call of Ktulu and Iron Maiden's Seventh Son - especially the mid section of that one.

If you had the opportunity to play any festival or venue throughout the world where would it be and why?

70,000 Tons Of Metal Cruise would be an awesome experience I'm sure as it's a different type of festival. I'd like to play the Eindhoven Metal Meeting too. Great festival I've attended a few times, the Effenaar is a very cool venue.

What would you say your main influences are when it comes to writing music?

The previously mentioned Celtic Frost, and I would add to that Voivod, Metallica and Black Sabbath. Inspiration can come from anywhere really, I can hear a few notes in a Pink Floyd or Portishead song that will catch my attention and make me want to pick up a guitar.

Aside from the band you've mentioned to me you work on the merchandise side of the music industry as well, do you ever find it difficult to combine the two?

No not really. It's the same with any job, there's a certain amount of juggling of work and social life.

Would you say there are any bands/albums that you never tire of listening to, even to the extent that you'd have the album on repeat?

What was the first ever gig for Damnations Hammer? Can you remember any special about that day?

The first Damnation's Hammer gig was at Manchester Academy supporting Kill2This. I remember seeing photos of the gig and was impressed with the lighting. The guy who was doing the lights had never heard us before yet he did an amazing job in reacting to the dynamics of the music. I also remember being pretty nervous that day as it was the first time I'd ever sung live.

Any shout outs or any gigs you have coming up soon now is your chance to let everybody know.

We play Hop Fest in Northampton this coming Sunday, Bloodstock in August and we've just been confirmed for Ragefest in Nottingham this coming December.
Thanks for the interview Tom!

Be sure to check out Damnations Hammer's album Unseen Planets,Deadly Spheres via the Spotify link at the top.