An interview with Horrenda 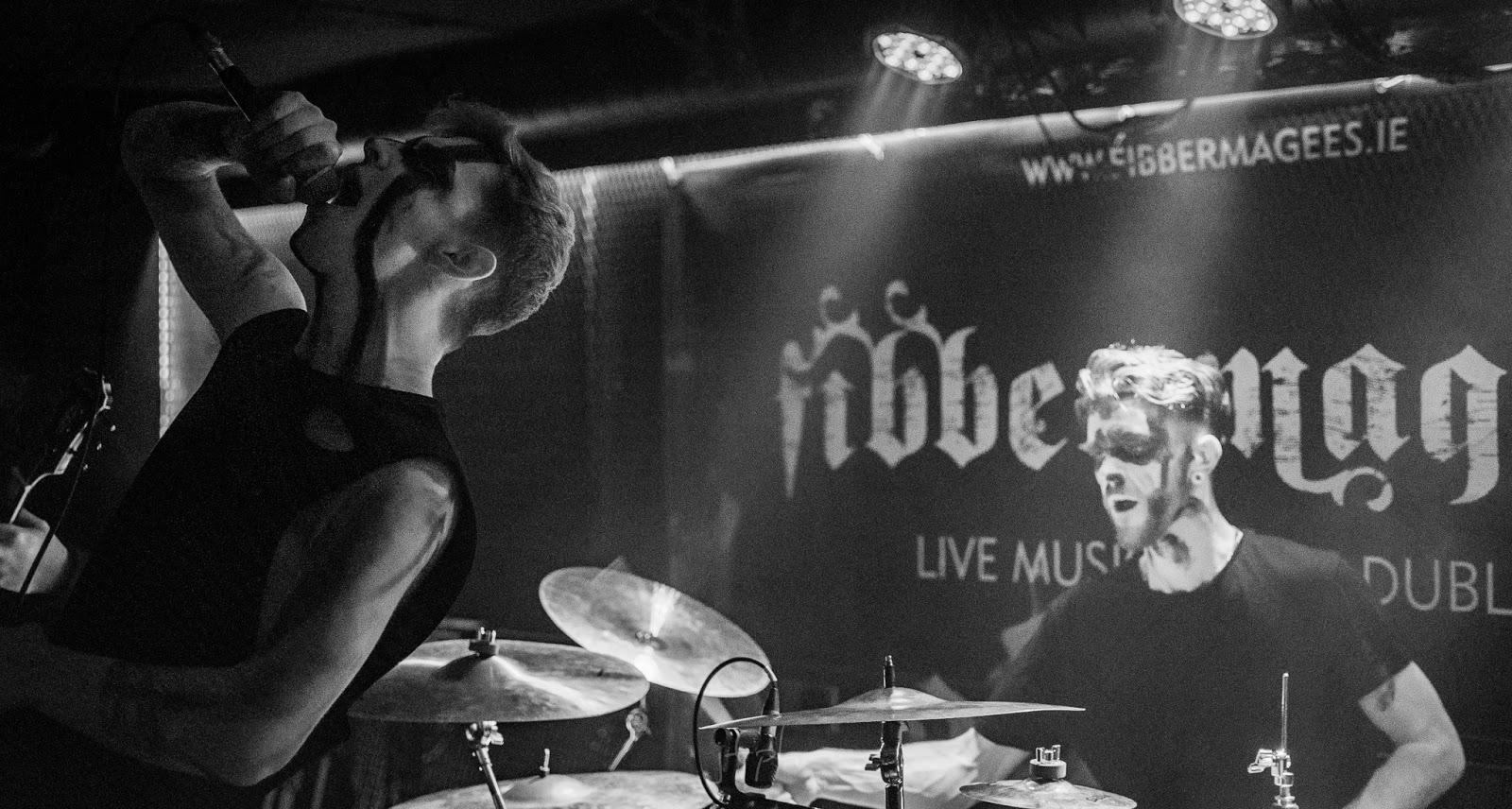 Recently I spoke to members of Horrenda who are a black metal band from Dublin, Ireland.

I now present to you my interview with Horrenda.

Thank you for taking the time to answer my questions

Could  you introduce yourselves to the readers.

Mark: My name is Mark O’Brien a.k.a “Morrdok” and I play guitar.

Darragh: My name is Darragh O’Connor a.k.a “Outis”; I am the founder and guitarist of Horrenda.

Horrenda started off as a solo project back in back in 2015 and later on in 2016 a full band was formed, how would you describe the process of finding the suitable members for the sound you wanted to create?

Mark: I know the guys from attending their shows in Fibbers a few years back where they play first on stage as the opener. I remember hanging out with them and be trying out Keith’s bass since I have tried a 5 string bass once before and was messing about on it. In January of this year, I was in Leicester visiting a friend who I met last year in August at Bloodstock Open Air who happens to be in a black metal band too. Also he is nearly the spitting image of Dead from Mayhem and he noticed my jumper which I was wearing a Mayhem De Myteriis Dom Sathanas jumper which I bought at the festival. We instantly became great friends from there. Shout out to John Davey and his band Besital Woods! I was in my hotel and got the message from Darragh who asked me if I want to join with the band and told him that I was in Leicester and will have a think about it when I get back home. By the time I got home, I asked him when was the next practice? Which he responded Monday every week. Darragh sent me a file of the latest release which was Banquet of Chestnuts and I had a week before my first practice with the guys in Temple Lane studios. So I went ahead and picked a few songs from the release and learned them off. As soon as the first practice session came around, I went in thinking "right play these songs correctly and don’t mess up!" Darragh and Keith explained to me that they don’t strictly push on limitations to playing and were open to new ideas that can fill in the songs from their set of “the hits”. So we bashed out the “the hits” and everyone was happy with it, Darragh asked me do you want to join? I said, absolutely! And here I am!!

Darragh: Difficult but worth the struggle. I didn’t start the band with the goal to gig or perform live; the goal was to craft dark music for people that would get it.
After two releases, I made the choice to try and help revive black metal in local Irish shows and find a group of musicians that wanted the same thing. At the beginning, we had a rotating cast of members that would stick around for one of two shows, or even one rehearsal. It just wasn’t for them or they had other commitments.
Once “Nomad” joined the band that was the first time that it felt like a band and then after a few more lineup changes we added “Cruxx” and “Donn” to the lineup and everything just clicked. In 2019, we added “Morrdok” and he just fit perfect into the band.

Keith: I joined after seeing a post Darragh put up on Facebook looking for a bass player. Since I joined Horrenda I missed most of the lineup changes but I’ve heard all the horror stories from Darragh and Arron.

When it comes to inspiration for the band itself which bands would you say have a huge impact on you to create the music you do today?

Mark: For song writing, my influences would come from Darkthrone and Mayhem. What I would do to come up with an idea is to explore a riff that is either catchy and punchy or fast and evil. I would mix up both methods. An example of this is from one of the practice sessions I would demonstrate the whole idea out and from there we keep musical elements that work best and others that don’t work. Jay would have a beat to the song and then Darragh and Keith join in and then Arron comes in with the vocals. And we developed the song Doom Tranquility.

Darragh: We listen to an array of music as people and that comes into the band. You can hear little bits here and there throughout our set. Naturally, bands like Mayhem, Burzum, Gorgoroth and Immortal are going to be our foundation. But we work in bands like Nile, Harakiri for the Sky(my favourite band), In Flames and so on. Then there’s random bits of blackened thrash thrown in too pulling from bands like Hoth mainly.

Keith: We can’t forget to mention both Altar of Plagues and Primordial. Being Irish black metal They were both huge inspirations growing up.

Personally it sounds like your sound has changed on your recent single release "Nerve Gas" compared to Neronian Times, would you say that was something you aimed to do at all?

Darragh: It’s a statement. This is how hard our first album is going to hit. We’re working with one of the best in Ireland today with Josh from JSR Audio to achieve that.
I still love Neronian Times, the cold harsh feeling of it, but it’s not the band anymore. Even when we play songs from it they’re different, better and more impactful.
That said, we’re working on a remaster of Neronian Times which will be coming out around Christmas time of 2019.

Does the name Horrenda have any specific meaning behind it at all?

Darragh: We wanted Synodus Horrenda but it was taken. To be honest, the specific meaning of the band isn’t in the name it’s in the song and album titles.

Something that caught my eye when looking through previous gigs you've played was with Mayhem in 2018, how did that go for you?

Darragh: We played the after show for Mayhem with Rotten Sound. That was a great show. Mayhem were great then Attila came to the show and we got to meet him after so that was huge. Hopefully, one day, we can actually open for Mayhem. Here’s hoping.

Talk me through lyrical content, what is your main theme to focus on? This may seem like a silly question when readers look at it and wonder why I'm asking a black metal band about lyrical themes but not all black metal bands write about the same things.

Darragh: Depends; I wrote everything in the beginning up until “Vile Lament” and everything on the first few releases mirror what I care about. So that was mainly political corruption in Ireland, the ongoing destruction of the Irish Culture and identity, folklore, history and my personal struggles. This is similar to what I cover in my solo releases with Outis.
When Arron “Nomad” joined he took over most of the song writing so things shifted towards motifs touching on the above but pulling in introspective thoughts blended with wider themes.
You can usually tell who wrote what by the nature of the lyrics but that’s getting harder to do now because of how collabtive we are now when writing.

Do you have any plans to play outside of Ireland at all?

Darragh: We play Belfast a lot but we’re hoping to finally get over to the UK once the album drops then work out from there. If any promoters are interested, we’d love to hear from you horrendaeire@gmail.com

You're currently working on your full length at the moment which is looking at a release at the end of this year, how is that going for you so far?

Darragh: Yeah, we’re in pre-production now so we’ll be in the studio in late August into September. At the moment, it’s all looking good.
We were very happy with how Nerve Gas turned out. It was a trial to see if this new direction was the right way to go, and how we work with Josh in JSR Audio.
So, based on how its been received, I think metal fans will really enjoy it.

Keith: We’re in full swing getting ready to go in and track the album. I keep running into people who are asking about it. So there seems to be a bit of buzz about it locally.

Mark: We have upcoming gigs coming up later this year. The first one in Drop Dead Twice on August 25th supporting Hexis and the next gig in Fibber Magees on November 23rd opening for Besatt, with bands Molekh, Pedophile Priests and Eternal Helcaraxe. See you there!!

Darragh: Thanks for reaching out. We appreciate it.
If people want to check us out live, we’ve a bunch of shows lined up and will be announced soon add us on social media for more. The album “Dìoltas” is set for release 31st October 2019.