Interview with A|V from Abduction 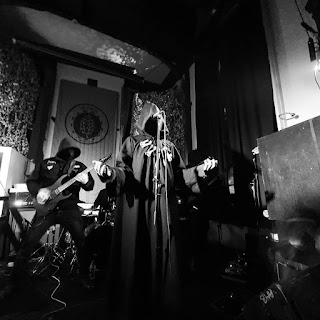 I am known as A|V. I am the man responsible for Abduction. I handle the composition of music and lyrics and perform most of what you hear on the records (drums have been hired guns this or programmed thus far).

Could you explain how "Abduction" started?

My frustration with slow progress of other bands I've been in and my taste for underground black metal lead me to search for a new outlet for music. I've always been rather DIY and began making tracks rather crudely with a home set up in the summer of 2016.
There were a small number of demo cassettes given way at the 2019 Blackwood Gathering as a launch to the project. This response was largely positive. Enough so for me to decide to continue.

Since then I've released 3 albums in 3 short years on various labels and interest seems to have grown dramatically. To my surprise, anyway.

Lyrically do you concentrate on any specific theme at all?

As with the music itself, the lyrics are conjured from the ether with little conscious direction: verbatum cast from decades of being a vessel to something much darker than that of real life.

There isn't one constructed theme as such, it's more important to me that the essence of black metal's mood is captured accurately and performed with passion.

That said, I have a bit of an obsession with ancient civilisations and the idea of human knowledge that has been lost in the flood. I think this premise, coupled with a very clinical view of the inescapable modern struggle has created something that seems to work, and evidently, some people enjoy.
All Pain As Penance represents the balance of the universe. There are echos of this balance throughout. It's upto the listener to interpret them of course.

The project started off as just you but recently you have been playing as a full band, what made you want to play with a full band?

I poured every ounce of sweat and bile into the latest album and it was a step up in terms of production and the offers of good shows kept coming in. It made logical sense to try and keep as much of the power and detail of the albums nuances as far as I could. So I spoke to a number of good friends of mine and we set about recreating the songs live, to honour the record as true as we could.

What kind of atmosphere do you try and create whilst playing live?

The same atmosphere as on record really. I want Abduction to feel uneasy and inhuman. I hope that the fast parts feel suffocating and that the space is something you can get lost in.
Hence the black masks the smoke etc. The faces and the emotion of the players is something that, when removed is very effective at making the hairs stand up.
As much as I love plenty of bands that use corpse paint, I feel that that trope has ran its course..

The cover art for "All Pain As Penance" is from the artist "Gabriel Delmas", what was it about this specific piece that made you decide that what the perfect cover art?

He's an artist I have followed for a while. His particular illustration style is something that I liked a lot. He's done far more detailed work recently but I happened upon 'The Procession' while browsing his earlier posts on Instagram and fell in love with it immediately. There are themes of apparitions, curses and ghostly prisoners throughout the album so it immediately stuck out. Fortunately he was kind enough to let me use it.

Remaining on the subject of art, "A Crown Of Curses" what is the meaning behind the artwork for that release?

The painting is an interpretation of Heracles and the Hydra. A Crown of Curses touches on a number of subjects but ultimately deals with the tribulations of life itself. It often feels like a set of biblical trials simply getting by day to day. I would hope most can see the parallels between this and Hercules' 12 Labour's like I can.

What kind of reception did you receive for "Abduction's" first live performance by yourself and then as the full band?

The first show was great. It was very nearly a complete disaster technically and I was certainly finding my feet but it went down well.

There is a whole other story about a certain other solo black metal artist who was also due to perform but had a very public tantrum beforehand, where his behavioural transgressions came to a head and he was kicked off the bill. He never showed, but I almost pictured a sort of budget-Nottingham Varg/Euronymous story occurring. What was most exciting to see though was how the black metal scene came together in calling out the biggest poser in the UK. A very odd situation indeed but one he most definitely deserved. I almost certainly benefitted from that and I hope it makes him furious.

What UK Black Metal bands stand out for you the most at the moment?

It's so full of good bands at the moment it's hard to pick them out but my personal favourites include Uir, Thy Dying Light, Arcane North, Wolvencrown, Crimson Throne and Absinthropy. I'm really excited for the new Caina Record as well.

I have friends and acquaintances in all of the above bands, so I suppose those!
A|V

Be sure to support Abduction via the link at the top.