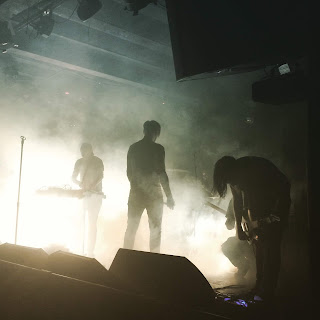 Here I present my interview with Hundred Year Old Man, a post metal band from Leeds.

Owen had an idea floating around to make a collaborative album featuring people and bands we had all met while touring with our previous bands. Around the same time Dan, Owen and I (Tom) started playing around as a three-piece, just writing and recording bits in my basement with no real goal in mind. The two ideas eventually merged and that led to the self-titled release.
We were originally going to pursue the band as a fully collaborative effort, but decided it would work best with at least some kind of "core" band initially. We’ve continued in this way ever since, but tried to keep as much collaboration as we can. We keep meeting new bands, so have an ever growing list of people we want to work with. As far as the live band goes, many members have come and gone over time, but nothing is ever final.

In 2017 you played the New Blood Stage at Bloodstock and the the year after you transitioned onto the Sophie Stage, what was the reception like for both performances?

Both times were great, but the second definitely kicked things up a level - being able to open the festival to a completely full tent was a great honour, and it was pretty amazing to see that many people in front of us. We also took our friend Tom from the band Ba’al to do lighting, and he did an incredible job.

"Breaching" was released in April last year, what kind of reactions did you receive on the day of its release?

It seems like so long ago already, I honestly can't remember the day itself. We had a great reaction to it around the release, and are still hearing good things about it. We recorded and produced it all ourselves (bar Magnus Lindberg’s mastering work) which could have been a risk, however we’re still happy with how it turned out and it’s great to hear that people enjoy it.

Would you say you have an major influences when it comes to writing music?

Everything we listen to influences us really. Obviously we all have some overlap in musical tastes, but all six of us listen to very different things a lot of the time.
We also get to play with a lot of incredible bands, one of the best parts of touring is getting to meet and see new bands each night. A couple from recent memory have been E-L-R and Raum Kingdom, who we hope to get over to the UK at some point in the future (plus Point Mort, Barque, Morpholith… and many more).

Do you ever try and capture a theme of mood when writing a certain or every song?

I don’t think we have ever actively planned it and decided ‘this song should feel like X’, but once a song starts taking shape we will quite quickly get a feel for where it is going and the mood it creates. I don’t think it often works as well to start writing something with a clear motive for how it should turn out, especially for us. Personally, I have tried to write parts with a specific idea in mind in the past, but it doesn’t necessarily go in that direction when we work on it as a full band. We find it best to just let things happen and go with what we feel, rather than trying to force the music in a particular way.

What was the band’s first show and what kind of reactions did you get?

Our first show was in a bar called Santiago's in Leeds with Iced Out, Lugubrious Children, Geist, Gloomweaver and Mausōleion (I can actually see a copy of the poster on the wall of our studio as I write this). Everything just seemed to work together that night, especially considering we (and the people watching) had no real idea what to expect – apparently no one believed it was our first show. There was a video of it on YouTube at one point which may resurface one day.

What song off "Breaching" did you enjoy writing/recording the most and why?

For me it would probably have to be Rei, which is technically not on Breaching, but all the tracks for Rei and Breaching were recorded at the same time, so I think it counts…
We had some extra time at the end of the session we had booked to record, so decided to try and write a song there and then. We played with a few ideas and decided which we liked best, then just started recording and went for it - I think a large part of that song was either the first or second take, and involved a lot of nods and gesturing. We then built it up with other instruments and layers over the top. It was interesting as it was completely different to our normal writing process so was a new dynamic.

Does the album art for "Breaching" have any specific meaning behind it?

Several members of the band have suffered from depression in various forms over the years; the album itself deals with this, personal loss and domestic violence, and the picture seemed like a fitting image to accompany the music.

Thanks to Gizeh Records, Wolves and Vibrancy Records and Astral Noise for helping us to release music, and thanks to anyone that has enjoyed it in any form.

Be sure to support Hundred Year Old Man via the link at the top.