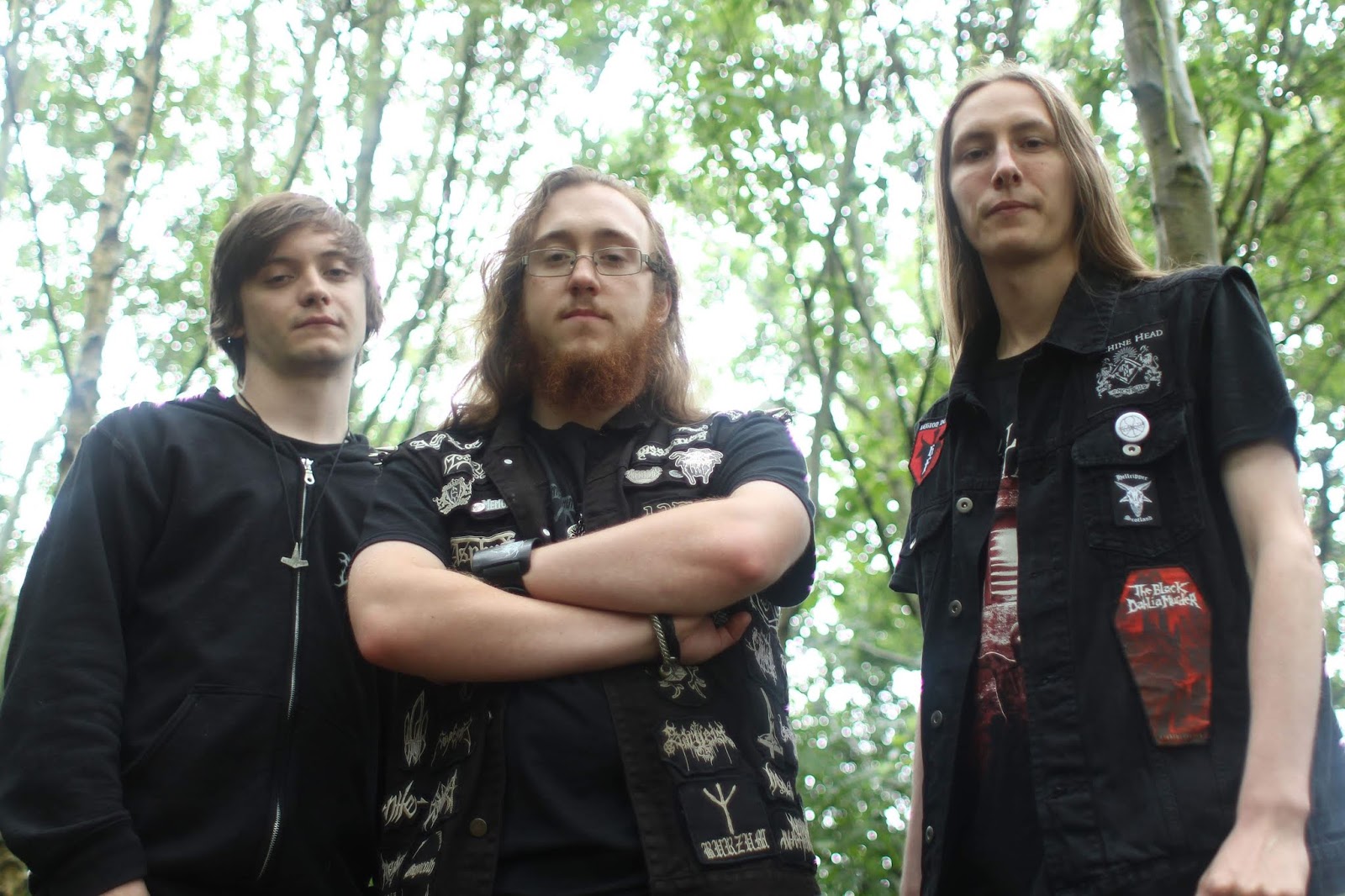 
Let's go back to the beginning of "Saarkoth" when what began as a studio project transformed into what the band is today, how would you describe the process in a whole?

Saarkoth initially started Lewis and I (Ellis) were at university. We were both quite into our Black Metal at this stage and we were seeing a lot of one man projects about. We both had the same idea of doing a one man project as something we could do in our spare time for fun, though once we realised we both had the same idea we decided to work together. We quickly drew Asa in since we had known him for a few years and he had played bass in a previous band that Lewis was in.

2017 mark's the first release by "Saarkoth" which is a two track demo, before releasing this to the public what kind of emotions ran through your minds?

The idea behind the 2017 demo was to be able to put out a couple of songs that we could burn to a disc in order to hand out to people in the campsites are Bloodstock that year. Beyond the Horizon and Awake in Eternal Sleep were the two most finished tracks and were a good display of our writing since Lewis wrote the entirety of Beyond the Horizon, aside from the lyrics, and I wrote the entirety of Awake in Eternal Sleep so it was a really good display of the two writing styles within the band. The actual making of the physical copies was a pain, though. I don’t think I want to repeat the process of burning the CD, making the sleeve and packaging it for a little while yet!

It did work though, we did get a boost of likes after Bloodstock so obviously someone enjoyed it.

Since then you released "The Wanderer" in 2018 which was then followed up by "Jera" in the same year, how did it feel being able to make such progress within a small gap?

Jera was pretty much finished writing and recording wise by the time that demo came out, it was just small additions at that point. Though I am still happy that we were able to get them out in relatively quick sucession. The CD single of The Wanderer actually came out quite a bit later than the online debut of the song, though. If you find the video of The Wanderer on our channel, it is actually missing some leads in a bridge that we added last minute before we made them CDs, which actually featured as a bit of a leitmotif on the album since the leads reprised the guitar on Jeras intro track, though that was done because The Wanderer was initially meant to close Jera so it seemed quite poetic to have it have those opening note feature in the closing song. Obviously the title track ended up being the closer, but The Wanderer is second to last so I still think it works. But, back on topic, it felt really good to be able to get them two releases out. We had a lot of fun making The Wanderer since we spent ages burning the ends of the lyric booklet with lighters and then putting them under the grill to essentially toast them. It was a very fun time for the band and I think really set us in the right mindset to get Jera out.

"The Wanderer" actually features a cover of "Defending The Realm" by UK Black Metal band "Winterfylleth", what kind of reaction did you receive from the band once they discovered it?

They said it was a nice effort and thanked us for the support. I actually listened to that cover the other day and I’m still quite happy with it. It was a bit rough around the edges but it was only a quick thing done at the last minute for a bit of fun in order to just wear our influences on our sleeve and to try and make the package a bit more worth it, since we were struggling to decide what to do to justify making the physical CD. We couldn’t decide doing a bonus song or a cover, so we did both.

Talk me through your lyrical content, a lot of bands tend to have those songs that really capture how they are feeling at the very moment of writing those lyrics, would you say you any specific lyrics like that?

Our lyrical content is quite themed, though we don’t firmly stick to one specific thing. Some of our lyrics are about the environment; the damage we’ve done to it. Regret about that and a desire to go back, like in Dreams of Emerald.

Then we also have songs that touch on more human issues such as mental health. The big one for that is definitely ‘Memories of You’ from ‘The Wanderer’ since that song was directly written for a friend of ours who killed himself, so the lyrics for that really try to explore the emotions we felt and what we imagine he, and others like him, potentially felt.

Though we’ve also got a song that’s literally just about Apocalypse Now. That’s one of Lewis’s.

On our upcoming album we expand a bit on both themes, looking at mental health and the environment more, though we are also using the nature theme as a metaphor for some of our own personal experiences.

You've been invited to play "The Blackwood Gathering" this year which features "Black Cilice" "Blood Countess" "Deadwood Lake" and many more brilliant Black Metal acts, how did it feel being asked to perform at the gathering?

To be honest, I thought we were a few years away from playing Blackwood. It was something I’d wanted to do since we formed and I learned of the festival, so to be able to do it this soon was a big shock and we were incredibly honoured to be asked to play.

On the subject of live performances when was the first "Saarkoth" performance and what can you remember of that night in regards to the reception you received and the performances by the other bands?

Our first gig was with Snapmare Promotions in Nottingham at The Angel Microbrewery on the 25th of February. We played alongside Liberator; ZOIC and Cadaver Soiree. It was a fun show for us, we actually had a drummer back then. I’d say the audience reception to us was good, though I was so wracked with nerves at the time that it’s all a bit of a blur. It was my first ever time playing live, so it was very much a mix of emotions. But I remember it going well, apart from me breaking Asa’s cable during the bass outro to The Wanderer.

When it comes to influences what bands would you say inspired you the most to create the music you do today? Any shout outs at all?

Our big influences are bands such as Winterfylleth and Agalloch, as well as the classics such as Emperor; Darkthrone and Burzum. There are sections in Jera and the new set of songs we’re working on which have parts that are very much in homage to these bands, such as the clean section in Awake, which has some lead sections which I wrote as a homage to Burzum’s Key To The Gate. We aren’t afraid to wear our influences on our sleeve, though. We try and blend their sounds to make something that is somewhat unique to us, and I feel like we’ve achieved that so far with our current output.

If I was going to shout people out then it’d absolutely be people like our friends in Deadwood Lake, who have supported us and helped us for a long time now. They helped us to get some great gigs and it’s always an absolute pleasure when we get to share a stage with them. Cadaver Soiree, too. We’ve only played with them twice but I consider them to be very good friends of ours, both the old line up and the new.

Other shoutouts will have to be all the different promoters who have put us on over 2018 and 19. Thanks to them we’ve had the opportunity to play in some lovely parts of the country and meet so many excellent people.

Be sure to support Saarkoth via the link at the top.