An interview with Tom from Devastator 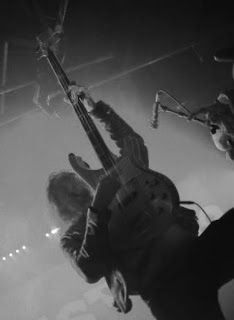 I recently caught up with Tom from Devastator which I now present to you.


Thank you for your willingness in taking part in this conversation, could you introduce yourself to the readers.

Tell me about the beginning of Devastator.

Devastator began as completely different band, name and line-up included, initially a drunken side project of sorts which achieved very little, other than one lone Sodom cover. Eventually circumstances changed and Devastator become the primary focus for us musically.

For anyone who hasn't listened to Devastator the best description would be "Blackened Thrash"? What bands would you say influence your music the most if any?

Indeed it would! Individually we’re influenced by so many different artists and types of music but as a unit, old classics like Bathory, Motörhead, Venom, old Slayer, old Sepultura, Celtic Frost, Sodom, Destruction, Kreator amongst others all play their part in our influences and our sound.

The mix of the first wave black metal and early thrash does form a rather good combination musically, talk me through lyrical content, what is your main focus?

Nothing that doesn’t seem unconventional for the style, death, destruction, occultism, suicide and war. All those happy subjects, we have managed to have at least one song about a woman...granted she stalks graveyards in search of a deceased mate...still counts though, right?

I guess that can count, it's still about a woman even if she is committing acts like that, so aside from Devastator do you have any other projects going at the moment, I know before hand you had Repulsive.

I do however given the time Devastator takes out on me I’ve sided them all, one Death/Doom project that released a full-length independently last year and an unannounced project as well, however as I said it’s on hold so whether it’ll see the light of day or not is questionable. 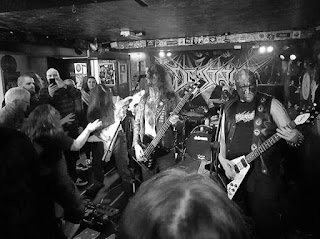 Would you say it's difficult to balance out all of them as well as life outside those bands? I know some people tend to find the life of being in a band very interfering with family and social lives outside of it.

With us it’s quite easy, we’re not gigging overly consistently day after day on long tours so we get plenty of time to spend with our wives, girlfriends and families. What I’ve found is more difficult is balancing the day job! Unfortunately as it currently stands, being in an obnoxious Rock n’ Roll band isn’t exactly paying the bills. We can dream though!

Jobs do tend be difficult to work around when it comes to certain dates for gigs, "If one can't play then the rest can't" is what a lot of bands tend to work by.
I've noticed you're quite the avid vinyl collector, what would you say is your most interesting pickup recently?

In all honesty I haven’t bought one in a while, money has been relatively tight so I don’t think my wife would be too impressed if I started buying vinyl in bulk again, ha! Some of the more interesting things that spring to mind at least what I think is recent is my copy of Venom’s “Possessed” that I picked up whilst I was in Australia in March which completes my Cronos-era records, with the exception of “Calm Before the Storm” which I’m in two minds of whether I’ll ever pick up. Probably will just out of habit, hell I would pick up a copy of Celtic Frost’s “Cold Lake” just to have a laugh.

Staying on the subject of vinyl, would you ever consider releasing the first Devastator release via 7" at all?

As an avid collector, it’s the dream to have your own release in your hands in vinyl form however it’s all about having content to put on it! I doubt we’ll put the demo on vinyl any time soon but we’ll definitely attempt to press the debut full-length on wax!

Maybe another form for the demo? tapes are going strong at the moment as well.

Final question is one that you may have an in depth answer or it could be something that you haven't thought about but I will ask anyway, what do you have planned for Devastator in the near future?

Perhaps! We did tapes as the final release for Repulsive before we hung up our straps and returned to the grave so perhaps we’ll go down the same route to reissue the demos in the future.

As for the future of Devastator, we will be recording towards the end of 2019 and if all goes well should have our yet to be announced full-length debut album by early 2020! We still have a handful of shows to announce for this year as well so keep your eyes peeled for those as well!

Thank you for taking the time to answer my questions Tom.

Do you have any shout outs at all or plug any gigs you have coming up soon?

No problem, thank you for having me!

Yeah, we’re up in Sheffield playing Thrash all-dayer at The Royal Standard in Sheffield which is going to be awesome, we’ve got one more festival to play this year which I can’t quite talk about yet but it’ll be announced soon, there’s some absolutely killer bands from Europe on that bill too, very exciting!

If anyone wants to keep up with Devastator they can find us on Facebook.com/devastatorukthrash and grab merch off us at our Bandcamp https://devastatorukthrash.bandcamp.com/as well as listen to our debut demo on Apple Music, Spotify and all other streaming services!