An interview with Jamie Knox from Horrendous 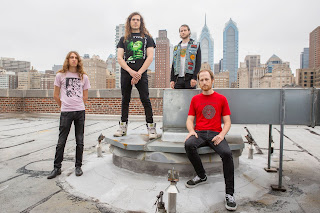 I spoke Jamie Knox who is the drummer in Philadelphia based Death Metal band Horrendous who are signed  with Season Of Mist.

Below you can find a bandcamp link to listen to and support Horrendous.


Thank you for taking the time to answer my questions.

My name is Jamie, I play drums in Horrendous.

You've been an active band for 10 years now with 4 albums behind you, at the very start of the band did you ever think you would get to where you are today?

Yes, it is hard to believe, but we started about 10 years ago.
The project began as a way to explore common musical interests, without any grand plans or intentions for the future. Matt, Damian, and I met in a storage space about once per week and just jammed.
We of course have come a long way, and could not have predicted any of this.

Your album The Chills presents itself as a death metal album but as we progress through albums there seems to be a slight change in sound, some may say it's took on a more technical/progressive death metal sound, was this something you aimed to do at all?

Our only aim has been to explore new ideas as they come, and to be open to evolution and change.
We do not have a road map guiding the direction of our music, and as musicians we are constantly challenging ourselves, so over time the music takes us to new places. I have to say, I find both imitation and stagnation pretty tiresome.

Your most recent album Idol was released through Season Of Mist, how did this opportunity come about?

We've been contacted by bigger labels at several points during our career, but SoM was the first to offer what we considered a reasonable deal.
On top of that, we know many of the employees well and felt comfortable being under their wing.
Their US office is also in Philadelphia, which is very convenient.

When was the first live performance for Horrendous and how did it turn out for you?

Our first live performance was probably early May 2009 at a local band night in Columbia, SC at the New Brookland Tavern. We played under a different name ("Horrendous" had not been chosen yet), and played early versions of the songs that appear on our Sweet Blasphemies demo.
It was probably nerve wracking and sloppy, but I remember having a good time.
There wasn't much of a metal scene in Columbia at the time, so I'm sure few people understood what we were doing.

As far as I'm aware the band didn't have a bassist until 2016, did you feel that as the band progressed you needed that bit extra to capture the sound you wanted?

Yes, it got to a point where it didn't make sense to play live without bass anymore - eventually, our bass lines became more complicated and stood separate from the guitar lines.
We also began to perform more regularly, so we decided to get a bass player.
Steve from Crypt Sermon played a few shows with us, but he wasn't able to commit enough time to the band.
Once we began playing with Alex, we knew we had the right guy for the job.

Tell me about your album art, from Ecdysis to Idol I've noticed a similarity, what made you choose this artist and do you aim for any specific theme when it comes to art?

Brian Smith has done all our album covers from Ecdysis through Idol.
Damian found him online while searching for artists, and the aesthetics of his work seemed to fit very well with our vision.
We do not give him much guidance, but he clearly is on a similar wavelength with us and creates art that eerily compliments our music.
We feel lucky to have the opportunity to work with him.

Out of the tours you've done which one was the most standout to date?

Definitely our 2016 US tour with Tribulation and Youth Code.
We were already big fans of Tribulation and we had not been on a real tour before, so the opportunity was a dream come true. We had a great time, and we learned a lot from watching them perform each night.
It was our first real taste of the road, and I think the experience set a bar that we strive for when touring now.

What are the plans for Horrendous from here?

The specifics are unclear, but we are moving forward as always.
We have a few more shows before the end of 2019, and we are in the midst of writing LP5, the follow up to Idol.
I imagine we'll shoot for some bigger tours in new places once LP5 is released, but we'll see.